Treragin Wood is now 22 years old, and I am into the second year of its first thinning.  But already I am having to change my thoughts, with 30% of the woodland being planted with ash, and likely to suffer from ash dieback disease.

The original planting mix at Treragin was designed with a firewood crop in mind, and I went for high proportions of ash, excellent firewood, and southern beech, a very fast growing species.  I was not sure whether the long term management would involve coppicing, or a more selective thinning regime, with lower volumes of firewood, but more large timber trees. Oh well, it has settled my plans on thinning rather than coppicing, as this will minimise the effects of the disease. 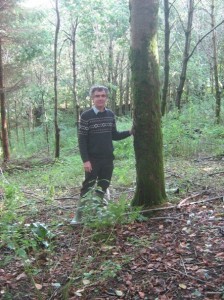 Not a bad size for just over twenty years

Initially I was thinning against southern beech (Nothofagus procera), as it was so vigorous, whereas from now on my policy will be take out the ash wherever there is a choice.  Fortunately, or perhaps presciently, the planting was arranged with trees well mixed, but in small groups, so nowhere will there be big open spaces when the ash dies.  Indeed, looking on the bright side, the spaces left by dying ash will provide opportunities for natural regeneration, and the beginnings of creating uneven aged woodland.

Southern beech was brought to this country, from South America, by Lord Bradford, and part of the national collection is not far from us on the Tavistock Woodlands Estate.  I went there at the weekend with my wife and the dogs, which was my first visit for over twenty years. Surprisingly, amid 2500 acres, I found them at first attempt; they were much taller than my trees, but I was a little disappointed at their moderate girths. As a seed source collection, however, they are retaining all the trees, and not thinning as much as would otherwise happen.

Groundflora a bit sparse – time for a thin!

Lord Bradford was also responsible for a unique experiment in continuous cover forestry, something I have come to be a firm supporter of.  Keeping a diverse woodland structure is as important as species choice in creating a wildlife woodland.  Many woodland flowers favour rides or young clearings, whereas birds benefit from a shrub layer or understorey, whereas if its bats or fungi that tickle your fancy, then a few veteran trees are the thing for you.  Twenty two years is a bit soon for Treragin to have veteran trees, but there are a few older oaks in the old boundary hedges; though with ash dieback disease you can get too much of some fungi!

Any cookies that may not be particularly necessary for the website to function and is used specifically to collect user personal data via analytics, ads, other embedded contents are termed as non-necessary cookies. It is mandatory to procure user consent prior to running these cookies on your website.